ONE HUNDRED YEARS ago Hiram Johnson, one of the most consequential governors in California’s history, called a special election. Johnson was a leader of a movement called Progressivism that reacted to America’s industrialisation by demanding women’s suffrage, direct election of United States senators (originally chosen by state legislatures) and other expansions of democracy. In this Californian election voters had to decide on three new types of balloting: referendums, recalls and initiatives. They accepted them all with enthusiasm.

And thus, in October 1911, California adopted the three tools of modern direct democracy. It was not the first state to do so. South Dakota had adopted initiatives in 1898, and Utah, Oregon, Montana, Oklahoma and other states had begun mixing their own cocktails of direct democracy from the three ingredients. Referendums, in which voters approve or reject laws already passed by a legislature, were the least radical change. Recalls, in which voters remove elected representatives and even judges in mid-term, seemed more adventurous.

Voters had to decide on three new types of balloting: referendums, recalls and initiatives. They accepted them all with enthusiasm

But initiatives (called “propositions” in California once they are listed on an actual ballot) had the most potential to turn politics upside down. They turn voters into legislators, since a successful initiative becomes statute. In states like California, initiatives can even turn voters into founding fathers who amend the state constitution. There are worlds of nuance in the detail. The package that California chose was especially powerful.

Californians thus explicitly chose a path that diverged from the one America’s founders had taken. To understand California’s problems today, you need to know what tradition California departed from. James Madison, Alexander Hamilton and their peers, as they met for the constitutional convention in Philadelphia in 1787, had deliberately rejected direct democracy. So why did Californians second-guess them?

Deeply versed in the classics, the founders had seen ancient Athens as the main historical example of direct democracy. In that city every male adult citizen voted in the assembly and there were no distinct executive or judicial branches. But this was also the Athens that condemned Socrates to death, rashly launched a disastrous pre-emptive war against Syracuse and barely survived repeated oligarchic coups before succumbing to undemocratic Macedonia.

Greek thinkers such as Aristotle and Polybius concluded that democracy was inherently unstable because it led to mob rule (in the same way that monarchy deteriorated into tyranny and aristocracy into oligarchy). Those three elements, monarchy, aristocracy and democracy, thus had to be balanced for a state to remain free, they argued. Rome (before the emperors) became the prime example of such a mixture. It was a republic, a “public thing”, but not a democracy, a thing “ruled by the people”. It had executives (in the shape of two annually elected consuls), an elite in the senate, and outlets for the vox populi in the popular assemblies.

To this Roman ideal of republicanism the thinkers of the Enlightenment added more liberal notions of freedom. John Locke injected a rather English emphasis on property and individualism. France’s Baron de Montesquieu, a huge influence on America’s founders, celebrated the commercial aspects of liberty. He also spelled out the separation of powers between the executive, legislative and judicial branches.

Against this intellectual backdrop, much of the famous debate that took place in 1787 and 1788, as the states had to ratify the proposed new constitution, was about how indirect America’s democracy should be. Both sides showed fealty to the historical ideal by writing under Roman pen names. Madison, Hamilton and John Jay, in the Federalist Papers, wrote as Publius, one of republican Rome’s first consuls. The Anti-Federalists opposing the constitution wrote as Brutus, the other consul, or as Cato.

The Anti-Federalists made a populist case for a direct democracy in which citizens participated actively, says Thomas Pangle, a professor at the University of Texas at Austin. The Federalists considered this view naive and dangerous. The society they envisioned was to be large, diverse and commercial. Madison, in particular, worried that a majority might oppress minorities, and that elected representatives might legislate out of “passion”.

Above all, Madison understood that a large and diverse nation would necessarily have many antagonistic “minority factions”, or special interests in today’s language. He wanted to contain these interests safely within a republican structure. Yes, they should have representation. But they should all compete against one another in the House of Representatives. The resulting laws would then be filtered through the Senate and the two other branches. As George Washington memorably told Thomas Jefferson, this was to “cool” House legislation as a saucer cools hot tea.

The Federalists won the debate, and America’s constitution (though much amended) remains the most durable in existence today. It balances not only minority factions, as well as populism and elitism, but also the federal and state governments. This is why, in the 19th century, Switzerland took an interest in it.

Switzerland after the Napoleonic wars faced a situation quite similar to America’s a generation earlier. Several independent states (cantons) needed to band together in a stable confederation that preserved both unity and diversity, and thus freedom. After a small but traumatic civil war between Protestant and Catholic cantons the Swiss decided in 1848 to import America’s constitution almost wholesale.

But Switzerland already had its own tradition of democracy. Starting in the 14th century, farmers in the Alpine valleys had formed assemblies not unlike those in ancient Athens in which all men made laws. They also sent delegates to co-ordinate policy (building a road, say) with farmers in other valleys. Such agreements had “to be carried back”, ad referendum in Latin, for approval in the assembly.

The Swiss grafted this tradition of direct democracy onto their American-style federal constitution. For the first time in history, initiatives and referendums thus became a regular part of national, as opposed to local, governance. But the details of this Swiss system were designed to serve its cultural and political purpose. As Corina Casanova, Switzerland’s federal chancellor, puts it, “we strive to solve conflicts through consensus and compromise.” Direct democracy aids, rather than hinders, that.

Any amendment to the Swiss constitution, for example, requires a referendum. But it also needs a simple majority of the cantons in the legislature. So just over half the cantons, which might represent a minority of Swiss voters, can overrule the majority in a referendum, thus addressing Madison’s worry about majoritarian tyranny. The proposed amendment then goes back to the legislature for redrafting—ie, for Washington’s “cooling”.

The same applies to initiatives. Citizens may launch one, but the legislature then has the option to draft a counter-proposal. Long before any voting, two or more drafts of legislation circulate, all trying to address the same problem. “In practical terms this means that behind the scenes, initiative committees and the authorities engage in a process of bargaining,” says Ms Casanova. “This leaves no room for extreme solutions, only well-balanced solutions backed by all.”

If the legislature presents a good alternative, sponsors may withdraw their initiatives, and many do. This drawn-out vetting process prevents conflicting initiatives as the various committees iron out legal and logical wrinkles. Much as Madison envisioned, the various special interests in Switzerland must eventually find common ground in what Ms Casanova calls an “institutionalised search for compromise”.

This was not, however, what attracted America’s Progressives to the Swiss model. John Randolph Haynes, a Californian doctor, founded a “direct-legislation league” after a trip to Switzerland. Nicknamed “Recall John”, he brought city-wide direct democracy to Los Angeles in 1903. He then joined William Rappard, a Swiss academic and diplomat who was teaching at Harvard at the time, and others, including Hiram Johnson, to extend the system to the whole state.

Unlike the Swiss, these Californian reformers had in mind a specific enemy, against which direct democracy seemed the ideal weapon. California was no Switzerland: much of it was still empty, geographically isolated and an institutional vacuum. Into this vacuum had stepped a private power: the railroad. 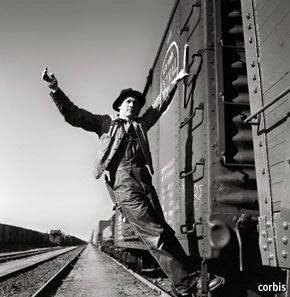 Blame it on the Southern Pacific Railroad

Founded in 1861 as the Central Pacific and later renamed the Southern Pacific, it was soon known as “the Octopus” because its tentacles corrupted every part of the state. The Southern Pacific bribed and cajoled legislators, judges, journalists and mayors. At one point one of its founders, Leland Stanford, was governor. He appointed a co-founder’s brother, who was also the railroad’s chief counsel, to the state’s Supreme Court.

As one reporter wrote in 1896, “it didn’t matter whether a man was a Republican or Democrat. The Southern Pacific Railroad controlled both parties, and he either had to stay out of the game altogether or play it with the railroad.” This was the corruption that enraged California’s Progressives. Hiram Johnson was especially livid. He had begun as a fisticuffs prosecutor in bribery and graft trials where he won the fame that launched him into politics.

From the start, Californian direct democracy thus had the opposite social purpose of its Swiss mother. As Ms Casanova says, the Californian system was designed to be “confrontational”. For example, it is quite difficult for petitioners to call a referendum, which merely passes judgment on a decision by elected representatives. But it is easy to launch an initiative, which circumvents the legislature by letting citizens make law.

California is also unique, in America and the world, in treating every successful initiative as irreversible (unless the initiative itself says otherwise). The legislature cannot change it. In effect, this makes initiatives a higher class of law. In California they often amend the constitution. And whereas Switzerland ensures that different initiatives are mutually compatible, California makes no such effort. A single ballot can contain directly contradictory initiatives, in which case the one with the most yes votes wins.

Direct democracy in California is thus an aberration. It has no safeguards against Madison’s tyranny of the majority. It recognises no saucer that might cool the passions of the people. Above all, it is not a system intended to contain minority factions. Instead, it encourages special interests to wage war by ballot measure until one lobby prevails and imposes its will on all. Madison and Hamilton would have been horrified.

But in 1911 none of this was yet clear. The system had the potential to be coercive, but its actual effect would depend on context and usage. Indeed, the number of ballot measures, once the novelty wore off, declined and stayed low as the Southern Pacific’s power faded naturally. For decades, immigrants populated the state, and most problems seemed to take care of themselves. But all this changed abruptly in 1978, with an unprecedented initiative that shapes the state to this day: Proposition 13.